I wasn’t expecting much. I was never an athletic person. When I was a kid I volunteered to be the goalkeeper on my soccer team, because that meant I didn’t have to run. Avoiding exercise like that has been trend throughout my life. Despite this, I’d joined and gone to the gym before – even had a trainer for some time in Seattle, where I lived. I forced myself to go after work each day but was happy to give it up when I moved to the Netherlands. (After all, I was biking a lot, so I didn’t need to do anything else, right?) There had been some results, but not enough to make up for how little I liked being there.

Unsurprisingly, my weight, never low, started to creep up in my years since leaving the US. My mother, who had recently started working out and eating healthy herself, suggested that I should do the same on a visit home. I asked her, jokingly, if she was willing to pay for a trainer. She was. When I got back to the Netherlands, she emailed to remind me of that.

So I went looking for a trainer. Marigje stood out to me from the beginning, and I made an appointment to talk to her and give it a shot. I liked her, so I signed up. As I said, I wasn’t expecting much – going by my last attempt, I would lose a little bit of weight and be able to fit into my older pants again, but nothing more than that.

Within a month, things already seemed a little different. For one, Marigje noticed that I really did need an asthma inhaler – that I was capable of doing certain exercises, but was taking much longer to recover than I should be. I got a new inhaler and so much changed. After using it, it was much easier to actually do things, and to recover. I wasn’t so tired the rest of the day. Armed with this, I kept at it – maybe not with enthusiasm, but at least with the knowledge that I could.

At the same time, Marigje helped me get my diet together. I was a little afraid of this, as I really enjoy food and eating in general. I’d always thought that eating healthily meant giving up everything that I enjoyed. Marigje helped me realize that this wasn’t so – that I could just make some changes (different things for dinner, different snacks, etc.) and that would do the job. Maybe it was the Dutch mentality, which encourages more of a balance than the American one.  The goal was to change how I ate from now on, not just go on a diet. Marigje gave me the knowledge of how to do that.

The results started to come. I could do more at the gym. My clothes fit loosely. When I went home in the winter, everyone noticed how different I was starting to look. I’m not going to lie – that helped me keep going. But I also found that I was good at a few things. I could deadlift well. I was flexible. I had more determination to get things right. As someone who’d never thought of herself as athletic, it was a surprise to me to find out that there were some athletic things I had skills in. Marigje helped me in finding out the things I liked to do and kept me doing them.

And along the way, somewhere, a few things changed. Instead of doing the minimum asked, I found myself trying harder. Seeing what I could do, and how far I could push myself. I always say that I’m not 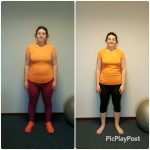 someone who enjoys exercise, but I’m finding myself much more enthusiastic about going and seeing what I can do. I bring up my routine in conversation. I’m proud of what I’ve accomplished and what I have accomplished. And I’ve lost nearly 20 kilos.

I’m still not saying that I’m an athlete, that I’m someone who builds her life around fitness. But I am fit now. And that’s not something I thought I would be saying.